At the start, the water system covered the initial Munford area and had about 300 customers. There were two wells; the No.1 well on 1st Avenue North, and No. 2 well was located on Carter Street. The No. 1 well was drilled in 1952 and in 1974 the pump was disconnected and this well was not used again.  The No. 2 well was drilled in 1960 and produced all the water for the water system.  The No. 2 well on Carter Street was and is 348’ deep and produced 160-170 gallons per minute from the Knox Aquifer as its source.

In October 1971 a grant in the amount of $57,400 and a loan of $230,000 was applied for from the Farmers Home Administration.  The purpose of this loan and grant was to build a waterworks and distribution system.  As a condition of this loan and grant, Munford Water Authority, Inc. was required to change its name to Munford Water and Fire Protection Inc.  This name change was made in February 1972.

Attorney for the Authority, to nominate and elect three men to serve as Directors of the Authority. These men were William M. Haynes, Frank B. Carter and William Nathan Foshee.  Mr. Haynes would be Chairman of the Directors and Mr. Foshee would be Secretary and Treasurer.​

Munford Water Authority, Inc.
Now accepting Visa and Mastercard payments in the office and over the phone.

A Brief History of the Munford Water Authority, Inc. Celebrating 40 Years of Service 1970-2010 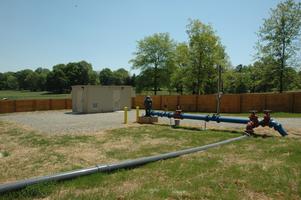 ¹For 5 years before the Munford Water Authority was incorporated, Mr. Frank B. Carter ran and maintained the Munford Community Water Service without any remuneration.

Some events of 1991 were an extension on Highway 21 north to install a metered connection with Oxford Water.  The minimum bill increased to $7.50 per month and three full time positions were established.  These positions were Manager, Maintenance Supervisor and Clerk and a part time meter reader.  William Haynes was manager, Barbara White was the clerk and John M. Daugherty, Jr. was maintenance supervisor.  In October of this same year, another rate increase was approved by the board, raising the minimum rate from $7.50 to $9.00.

The main event for the authority in 1992 was that the number of directors changed from three to five.  The board makeup was: Malcolm G. Coley, Chairman; Carl F. Smith, V-Chairman; Donald O. Cockrell, Director; William E. (Billy) Swinford, Director; and Arthur L. Dial, Director.  Carl F. Smith became a board member after the death of William Haynes, and Malcolm G. Coley became manager as well as board chairman.  William Haynes was one of the incorporators in 1970 and had served as board chairman and manager during his 20 years serving the authority.

In 1996 Stella Fowler was hired as clerk/secretary.  Another extension was also done that year. This was the Metal Samples extension which added water service to Cedars Road, Hopeful Road, Henderson Lake Road and Davie Road.

In July 21, 2005, the Board of Directors signed a resolution, approving the employee’s enrollment into the State Retirement Systems of Alabama.

In May 2007, the Water Authority moved to our new office at 78 Railroad Street.  The construction of the new office was made possible by the State buying our old office building and land located along Highway 21 for the widening of Highway 21 to a four-lane.  The new office has about twice the space as the old office.  For the convenience of our customers, the new office is equipped with a drive-thru window for paying bills.

In 2007, the Board of Directors started discussing the need for a new well as the demand for water was going up each year and the only way to meet this increase in demand was to buy more water from the Oxford Water Works.  Financing options for a new well were investigated in 2008 and in 2009, a contract was granted to construct a 500 GPM drinking water well.  The well was completed in April, 2010, and an operating permit was granted from ADEM for 400 GPM (the reduction from 500 GPM to 400 GPM was due to the ground water supply.)

On April 30, 2011, Munford Water held a start up ceremony for the new well and combined this with Munford Water Authority, Inc.’s 40th Anniversary Celebration.